Prime Minister Pham Minh Chinh and his Lao counterpart Phankham Viphavanh have witnessed the signing and handing over of nine co-operation documents between the governments, ministries, agencies, and enterprises of the two countries. 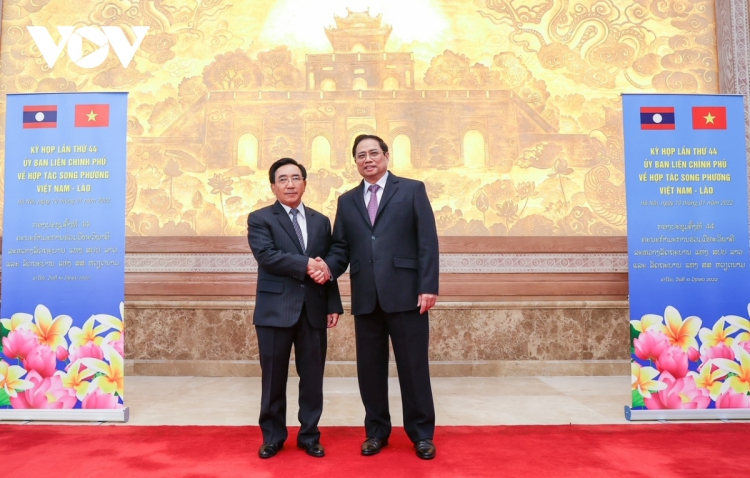 The signing ceremony was held as part of the 44th session of the Vietnam-Laos Intergovernmental Committee on Bilateral Cooperation on January 10.

During the meeting, the two sides discussed and concretized the conclusions of the two Politburos and the agreement on the co-operation plan between the two nations for 2022. They therefore agreed on the drastic implementation of the plan from the beginning of the year, with a view to bolstering co-operation across multiple fields such as politics, foreign affairs, security and defence, investment, and trade.

Both sides went on to state their appreciation and show their elation at the results of comprehensive co-operation between the two countries ahead this year, particularly through the effective implementation of high-level agreements of ministries, sectors, and localities.

Co-operation in politics, foreign affairs, national defence and security, economics, culture, social affairs, and people-to-people exchanges have been further strengthened and expanded. This can be seen in education and training which has been promoted, with the number of Laotian students studying in Vietnam rising to 14,000.

Trade turnover also reached US$1.3 billion, exceeding the set target and representing an annual rise of 30.3%.

Vietnamese enterprises have made significant contributions to the Laotian budget, pouring in more than US$1 billion over the past five years. Indeed, the new mechanism for co-ordination and promotion of ties between the two sides, typically through the Vietnam - Laos Intergovernmental Committee, have continued to prove effective.

Regarding the direction of co-operation moving forward, the two sides consented to focus on competently realising joint statements and agreements adopted by the two Politburos and at the 44th session of the Vietnam-Laos Intergovernmental Committee on Bilateral Cooperation.

The two sides therefore agreed to ramp up political, foreign, security, defence, investment, and trade relations, with two-way turnover in 2022 set to soar by 10% compared to 2021. They emphasized the need to expand co-operation in human resource training, investment in transport infrastructure projects, and co-operation in the management of sustainable use of water and natural resources.

Both nations will will make every effort to effectively organise the “Vietnam-Laos, Laos-Vietnam Friendship and Solidarity Year 2022” which will mark the 60th anniversary of bilateral diplomatic relations and 45 years of the Vietnam-Laos Treaty of Amity and Cooperation.

The event gave the chance for the two countries to encourage ministries, sectors, and localities to expand their relations and support each other. In the spirit of mutual trust, the both sides affirmed their readiness to offer mutual support and co-operate at international and regional forums. These contents have been concretised in documents that were signed during the 44th session of the Vietnam-Laos Intergovernmental Committee on Bilateral Cooperation.

The success of the meeting is set to offer fresh impetus to stepping up bilateral co-operation in a more practical and effective manner, making an important contribution to strengthening the traditional friendship, special solidarity, and all-around co-operation between Vietnam and Laos.

Vietnam allows Laos to use seaports

To get a digital vaccine passport, people must declare accurate information which...

Indonesia’s state utility power company PLN said on May 1 that it will offer free...

The 23rd ASEAN-Japan Summit was held online under the chair of Vietnamese Prime...

The European General Court has rejected the European Commission’s (EC) request to...

3,000 firms in HCM City get support to increase innovative...

Vietnam holds great potential in medical tourism development as it boasts a lot...