Foreign Minister Bui Thanh Son has affirmed the nation’s recognition of the great importance of the strategic partnership between Vietnam and Germany, going on to express his pleasure that bilateral ties have developed well across a variety of fields. 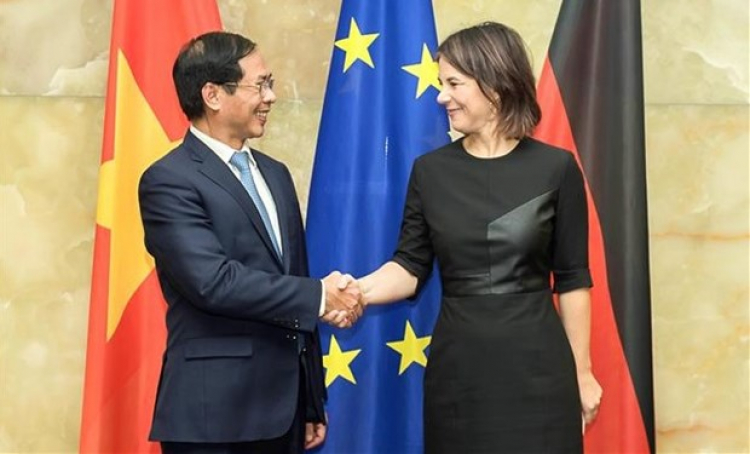 The Vietnamese Minister paid an official visit to Germany from September 26 to September 27 at the invitation of his German counterpart Annalena Baerbock, with a view to promoting relations between the two countries.

During the meetings held with German leaders, the Vietnamese representative thanked the German Government and their people for supporting with the donation of a large volume of COVID-19 vaccines and medical equipment. This contributed to the nation quickly containing the pandemic and opening its doors for socio-economic recovery.

In response, German leaders highlighted the country as an important partner of Germany in Southeast Asia and the Asia-Pacific region, stating their positive view of Vietnamese achievements in socio-economic recovery and its development moving into the post-pandemic period.

They have been delighted with the strong development of co-operative relations between the two countries across a multiple fields, thanking the Vietnamese Government and people for donating masks from the outbreak of the pandemic in 2020.

German President Steinmeier recalled the memory of previous visits to Vietnam as Foreign Minister and extended his greetings to President Nguyen Xuan Phuc and other senior Vietnamese leaders, while expressing his desire to visit the nation again in the near future.

Regarding bilateral economic and trading ties, Minister Son suggested both sides continue to effectively implement the EU-Vietnam  Free Trade Agreement (EVFTA) and expressed his wish that the German National Assembly would soon complete the ratification of the EU-Vietnam Investment Protection Agreement (EVIPA). In addition, the German Government supports the European Commission (EC)' removal of the yellow card placed on seafood exports from Vietnam in the near future as part of efforts to further facilitate investment, trade, and business trade activities between the two countries.

The two sides therefore agreed to ramp up co-operation in new fields such as climate change response and renewable energy to deepen the strategic partnership. This will thereby contribute to both nations’ full and serious implementation of commitments made at the 26th UN Climate Change Conference (COP26) and the settlement of global problems.

According to German President Steinmeier and Bodo Ramelow, president of the Federal Council, both nations have huge potential and plenty of room to step up co-operation moving forward. There will be a particular focus on investment and trade, as well as in areas where Germany has strengths such as science - technology, environmental protection, climate change adaptation, vocational and labour training, and local co-operation. They suggested that the two country work together to remove difficulties in bilateral trade relations moving forward.

Minister Son and German leaders also discussed a number of international and regional issues of mutual concern, agreeing that the two nations must continue to effectively co-ordinate and support each other at organisations and multilateral forums, including promoting ASEAN-EU co-operation.

With regard to the East Sea issue, both sides shared their stances on ensuring peace, stability, security, co-operation, and development in the region, as well as resolving disagreements by peaceful means. This should be done on the basis of respect for international law and the Charter of the UN, especially the UN Convention on the Law of the Sea (UNCLOS) 1982.

FM Son thanked the Government and people of Germany for their interest and support of the Vietnamese community in the Central European country, expressing hope that the German side would continue to create conditions for the Vietnamese community to integrate more successfully into society. This will serve to contribute to the diversity and socio-economic development of Germany, serving as a bridge between the two peoples.

As part of the visit, Minister Son held a working meeting with Vietnamese Embassy staff in Germany and met with representatives of the Vietnamese community in Germany.

The World Bank (WB) warned on April 14 that the slow growth of Cambodia’s construction...

The reasons why you should come to Nha Trang

Nha Trang has a unique beauty with blue sky and sparkling sunshine. The fresh air...

The 37th ASEAN Summit and related summits held online from November 12-15 in Hanoi...

ASEAN, Korea team up to nurture homegrown IT startups

The ASEAN-Korea Centre (AKC) together with the Gyeonggi Center for Creative Economy...

Vietnam Airlines is planning to resume international flights in the first half of...

The ASEAN Coordinating Council (ACC) held its 25th meeting in the form of a video...

More than 100 million voters in Indonesia were expected to head to the polling stations...