Prime Minister Pham Minh Chinh has suggested that the IMF make it a priority to support Vietnam as a developing country, particularly one that has experienced many years of war, with its economy currently being in transition and still facing numerous challenges. 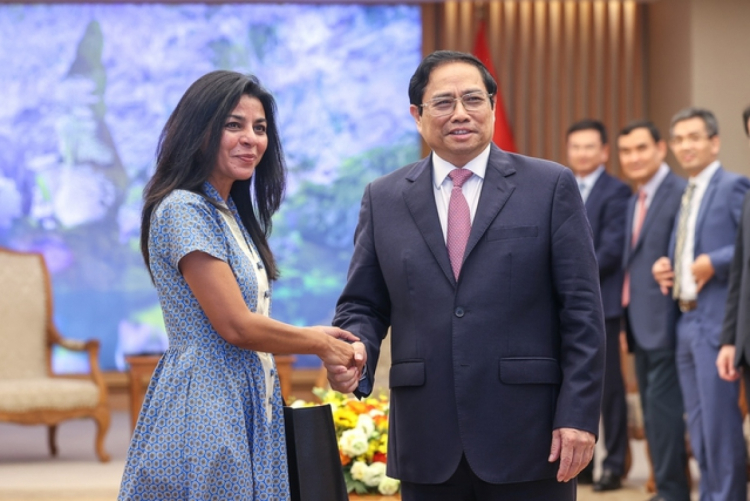 PM Chinh received Era Dabla-Norris, head of the organisation’s Article IV Consultation of the Department of Asia-Pacific, in Hanoi on October 3.

During the course of the meeting, the Government chief thanked the valuable support offered by the IMF to Vietnam since the nation’s early years of development. Notable assistance includes recent policy advice, technical assistance and human resource training, especially analysis reports, assessments, and recommendations for economic management during the COVID-19 pandemic.

The PM welcomed the timely and appropriate measures and policy response taken by the IMF over the past two years in order to help countries overcome the most difficult period during the COVID-19 pandemic.

He also expressed great appreciation for the timely issuance of the Food Shock Prevention Mechanism by the IMF, a one-year loan for countries in difficulty in terms of ensuring balance of payments and accessing food resources, which was adopted on October 1 with the aim of supporting countries facing serious "food insecurity".

Discussing the country’s current economic situation, the PM said, along with continued COVID-19 containment efforts, the Vietnamese economy is currently stable and enjoying a positive recovery.

GDP over the initial nine months of the year soared by 8.83% on-year, while the national economy grew evenly in all three areas of agriculture, industry, and services.

Inflation was able to be controlled at 2.73%, whilst exchange and interest rates, along with the foreign currency market, were largely stable.

Most notably, the major balances of the economy were competently ensured, with nine-month state budget revenue reaching 94% of the estimate, up 22% on-year. In addition, import and export turnover hit nearly US$559 billion, representing an annual rise of 14.2%, with the trade surplus standing at US$6.52 billion. External relations and international integration are being now actively being promoted in accordance with the situation, as well as the nation’s prestige and growing international standing.

As Vietnam is a developing country still in transition, it still faces numerous difficulties, leading to PM Chinh to request that the IMF move to increase policy advice on economic governance and risk response for the Government and relevant agencies. Other efforts should include providing training programmes and technical support on economic management, and actively helping the country with green economy development, energy transition, climate change response, digital transformation, and the development of a digital economy and e-commerce, the cabinet leader told his guest.

Moving forward, the country is steadfast in its aims to control inflation, stabilise the macro-economy, promote growth, ensure major balances of the economy, initiative, flexibility and efficiency, whilst carrying out prudent and certain monetary policies.

In response, Dabla-Norris congratulated the Vietnamese Government on socio-economic development achievements over recent years, noting that the local economy has continued its success in 2021 and 2022. This is particularly notable in comparison to many other countries, with this largely down to a successful vaccination campaign, strong and effective solutions taken by the Government, and the foundations formed before the pandemic.

Speaking highly of Vietnamese monetary and fiscal policies, she outlined that the harmonious combination of policy tools has helped the Government to get control of inflation, amid the socio-economic recovery and development programme being carried out steadily.

The IMF predicted that Vietnamese GDP growth for this year would be at between 7% and 7.5%, with inflation lower than the ceiling target of 4%, figures similar to comparable countries elsewhere in the world. Besides, production and business activities are in the process of recovering strongly and widely.

This factor is one that the fund hasn’t seen in other economies, she said, noting that there are therefore grounds to believe that the economic panorama is generally positive, despite enduring some external shocks.

If solutions are properly implemented, the nation is fully able to weather a difficult 2023 and head towards a more positive 2024. The basic factors can be viewed as solid, with investors still able to put their trust in Vietnam, according to Dabla-Norris.

At the meeting, the IMF representative also put forward many recommendations, including combining macro-policies in a prudent, concerted, unanimous, and consistent manner, properly implementing policy marketing to manage risks and mitigate policy selection’s impacts, and properly carrying out the recovery and development programme.

PM Chinh used the platform to acknowledge the IMF’s recommendations, noting that they are in line with the orientation outlined by the Vietnamese Government, adding that the Government and relevant agencies will continue considering the recommendations and applying them to governance activities.

Australian Prime Minister Scott Morrison said on November 15 that the signing of...

The 12th Mekong-Japan Summit was held online on November 13, under the chair of...

A delegation of the Party, State, National Assembly, Government and Vietnam Fatherland...

Minister of State-Owned Enterprises of Indonesia Erick Thohir has said the Indonesian...

Vietnam attracts over US$18.7 billion in FDI over nine...

Vietnam has attracted more than US$18.7 billion in foreign direct investment (FDI)...

Vietnam, host of the 8th ASEAN Ministerial Meeting on Minerals...

An image taken by Vietnamese photographer Nguyen Huu Binh has finished first in...