Thailand’s economy contracted 1.8 percent in the January-March period from a year earlier, the sharpest fall in eight years in the first quarter, mainly due to the COVID-19 pandemic’s impact on tourism and domestic activity. 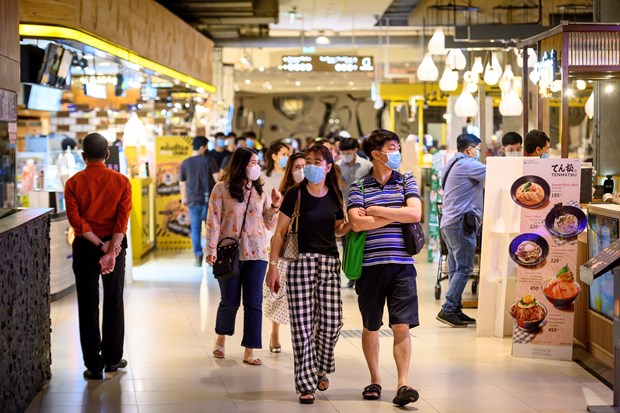 People at a shopping centre in Bangkok, Thailand, on May 17 (Photo: AFP/VNA)

On a quarterly basis, the economy shrank a seasonally adjusted 2.2 percent, the country’s National Economic and Social Development Council (NESDC) said on May 18.

The state planning agency revised the quarterly GDP in the fourth quarter of 2019 to a 0.2-percent contraction from 0.2-percent growth, meaning the economy slipped into a technical recession.

It slashed its GDP forecast for 2020 to a contraction of 5.0 – 6.0 percent from growth of 1.5 – 2.5 percent projected in February, which would be the worst decline since 1998 when the Asian financial crisis damaged the economy.

Besides, the agency also cut its projection for this year's exports and foreign tourist numbers, the main drivers of Thai growth.

NESDC Secretary-General Thosaporn Sirisumphand warned that the economy will be hardest hit in Q2 by lockdowns before gradually recovering.

According to the statistics website worldometers.info, as of May 18 noon (Vietnam time), Thailand had recorded 3,028 COVID-19 infections, including 56 deaths./.

The Thai Cabinet has approved a Special Tourist Visa proposal to allow long-stay...

Thailand: Sugar makers warn of output cut due to drought

Sugar makers in Thailand have warned that another drought could significantly cut...

In this hot summer, spending time in a mangrove forest is a perfect plan for travel...

Two online exhibitions for children are scheduled to run between September 20 and...

The Vietnamese Embassy in Thailand on March 24 assisted 16 Vietnamese citizens to...

Apple is currently holding talks to make Apple Watches and MacBooks in Vietnam for...