The Vietnam Union of Friendship Organisations (VUFO) and other people’s organisations have flexibly responded to the current challenges and renovated their activities to adapt to the new situation, VUFO President Ambassador Nguyen Phuong Nga has said.

The National Foreign Affairs Conference on implementing the Resolution of the 13th National Party Congress is scheduled to take place on December 14, in Hanoi.

On the eve of the conference, the President of the Vietnam Union of Friendship Organizations, Ambassador Nguyen Phuong Nga gave an interview about the difficulties, advantages as well as new opportunities for people-to-people diplomacy in the new situation.

The Vietnam Union of Friendship Organisations (VUFO) and other people’s organisations have flexibly responded to the current challenges and renovated their activities to adapt to the new situation, VUFO President Ambassador Nguyen Phuong Nga has said. 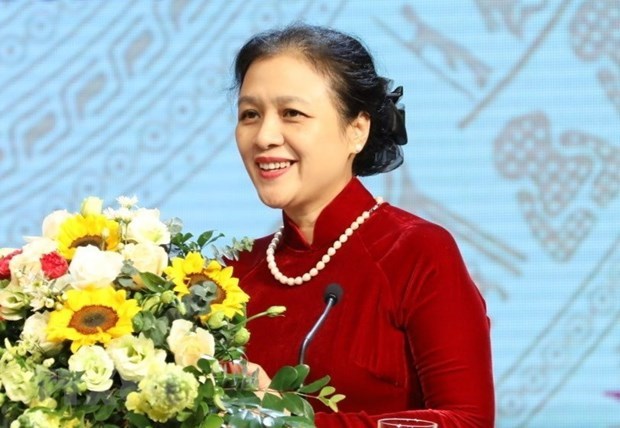 In 2021, the situation in the world and in the region as well as in the country will have advantages and disadvantages. Similarly, people-to-people diplomacy also faces advantages, difficulties and new opportunities. In terms of advantages, domestically, the 13th Party Congress was successfully held and determined the foreign policy of the Party and the State is to continue to diversify and multilateralize international relations, to be proactive and active extensive integration; shows that Vietnam is a responsible and active member of the international community.

In particular, the Congress clearly stated the task of promoting the pioneering role of foreign affairs in creating an environment and peace and stability, mobilizing international resources, enhancing Vietnam's position, and building diplomatic relations. Vietnam is comprehensive and modern with three pillars: Party diplomacy, State diplomacy and people-to-people diplomacy.

These are very favorable premises for people-to-people diplomacy. In the world, the common trend is peace, stability and cooperation. The role and voice of the people and people's organizations are increasingly valued and promoted.

Besides, people-to-people diplomacy is also facing challenges. First, the international situation is very complicated, greatly affecting the objectives, modes of operation and nature of people's organizations. The Vietnam Union of Friendship Organizations as well as other Vietnamese people's organizations have flexibly responded and renewed their operation methods to quickly adapt to the new situation and continue to carry out their activities. move effectively.

She said the 13th National Party Congress has identified people-to-people diplomacy as one of the three pillars of external relations, together with Party diplomacy and State diplomacy.

Highlighting Vietnam’s friendship with foreign countries, friends and partners, which has been consolidated over the past decades, the VUFO President said Vietnam is working hard to expand the network of friends and mobilise international resources to serve national construction and development.

During the interview, Nga also reviewed achievements recorded in people-to-people diplomacy across spheres, saying despite the pandemic, Vietnam’s connection with international friends has not been disrupted thanks to the utilisation of internet and social platforms.

She said VUFO has so far raised more than 47 billion VND (2.04 million USD) in support of the COVID-19 combat. Meanwhile, 57 non-governmental organisations have donated over 10.6 million USD to help Vietnamese fight the pandemic.

The Vietnam-Laos, Vietnam-Cambodia and Vietnam-India Friendship Associations, among others, have also mobilised resources to aid foreign friends affected by the pandemic, Nga added.

She emphasised contributions of the associations to the country’s socio-economic development through the organisation of seminars over the past time. People's diplomacy in general and the Union's activities in particular have a very noble mission, which is to cultivate peace and friendship. Therefore, all the activities of the Friendship Union are aimed at this goal.

Right after the pandemic was brought under control, people-to-people diplomacy activities have been integrated into overseas trips by high-ranking leaders, according to the VUFO President.

The upcoming conference will set out specific orientations, directions and strategies for agencies, ministries and branches in this field. It will also seek measures to promote the effectiveness of coordination between agencies and localities, and between Party diplomacy, State diplomacy and people-to-people diplomacy./.

In the first 11 months of this year, the number of foreign tourist arrivals to Vietnam...

Vietnam will impose a zero percent tax rate on 31 commodities imported from Cambodia...

'No one is left behind': Vietnam provides support for foreigners...

Representatives from the Belgian Foreign Ministry donated 100,000 doses of the AstraZeneca...

The Japanese Ministry of Foreign Affairs announced on September 16 that the country's...

A high-ranking delegation of the Lao National Assembly...

This is the first overseas trip by Saysomphone Phomvihane in his capacity as NA...

Domestic tourism will be key for the revival of tourism industry in Viet Nam, said...