More than 300,000 migrant workers, many of them from South Asia, live in dorms in the prosperous city-state, where they are typically packed into shared rooms and sleep on bunk beds.

Bangladeshi migrant worker MD Sharif Uddin used to spend his days off with friends outside his cramped Singapore dormitory, but coronavirus curbs have for 18 months left him stuck inside during his spare time.

More than 300,000 migrant workers, many of them from South Asia, live in dorms in the prosperous city-state, where they are typically packed into shared rooms and sleep on bunk beds.

The vast complexes were hit by COVID-19 and locked down at the start of the pandemic, while restrictions were introduced across the whole country for a period to prevent a broader outbreak. 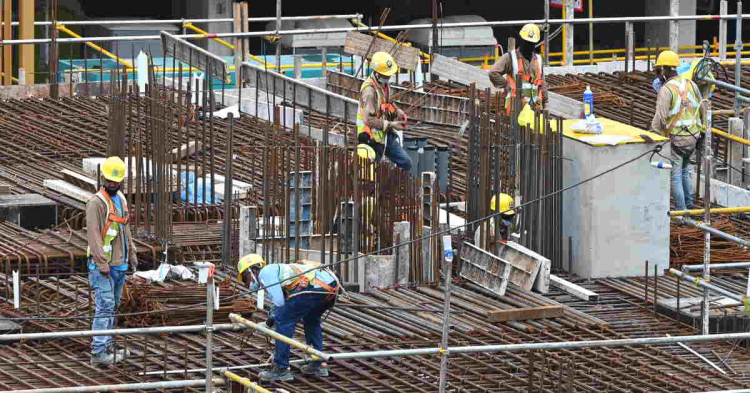 In this photo taken on 14 September, 2021 migrant workers are pictured working at a construction site in Singapore. (AFP Photo)

Curbs have been eased for most in Singapore, where – despite currently facing a renewed virus wave – vaccinated people can go out shopping and to restaurants, and borders are gradually re-opening.

But it is a different story for the low-paid migrants, who remain subject to far more onerous restrictions that mostly allow them to travel only between their work and accommodation.

"It's a very painful life... like prison," said construction site worker Uddin, adding that before the pandemic he used to meet friends at the weekend to drink coffee, recite poetry and gossip.

"We're only allowed to go to work and home, back and forth, and nowhere else. It's like living under house arrest," added the 43-year-old, who has worked in Singapore for 13 years and written two books about his experiences.

Beyond heading to work, the migrants are allowed occasional trips to specially-built "recreation centres" that typically comprise shops set around a square, and sports facilities.

In April, 10,000 migrant workers who were not infected with Covid-19 in this country received the first vaccine. These migrant workers are currently living in the five largest dormitories of the "lion island" namely Sungei Tengah Lodge, Tuas View Dormitory, CDPL Tuas Dormitory, PPT Lodge 1B, and Kranji Lodge 1.

When the dormitories – self-contained and usually in out-of-the-way parts of Singapore – became the epicentre of the city's first COVID-19 wave last year, it sparked national soul-searching.

Calls mounted to improve the livelihoods of migrants who have for decades done the back-breaking work of constructing the financial hub's gleaming skyscrapers, cleaning housing estates and maintaining public transport.

The government pledged to take steps such as building new dormitories with more modern facilities and more space for residents.

But the continued restrictions faced by the workers – who typically earn from SG$500 to SG$1,000 (US$370 to US$740) a month in one of the world's most expensive cities – highlight how little has changed in reality, critics say.

Authorities treat the migrants like "an economic commodity", and fail to "accord them the same rights, the same freedoms that our citizens have," he said.

As criticism mounted, authorities in the city-state of 5.5 million started a scheme that allows a limited number to make organised trips to designated areas.

About 700 participated in the scheme's first month in September, and it was expanded at the end of last month to allow up to 3,000 workers a week from the dorms to participate.

But this still represents only a tiny proportion of the workers.

The government maintains that continued curbs on migrants – who come from countries including Bangladesh, India and China – are necessary as there is a higher risk of virus transmission due to their living conditions.

This is despite the fact 98 percent of dorm residents have been fully vaccinated, higher than the city-state's overall rate of 85 percent.

"Any easing of movement restrictions will need to be done in a careful and calibrated manner," Minister for Manpower Tan See Leng told parliament last week.

But this is little comfort for dorm resident Amir from Bangladesh, who longs to have the freedom to go where he wants.

"We can only see our dormitory life and our construction site. We cannot travel... cannot see outside."

"We are facing psychological problems," he said, adding their "fundamental rights as workers and human beings" had been breached.

Currently, Singapore has about 320,000 migrant workers living in dormitories and COVID-19 infections there make up the majority of the more than 60,000 infections in the "lion island nation" recorded so far./.

A teleconference between the Prime Minister and the business community, localities...

UNFPA extremely proud to have been associated with Vietnam’s...

The United Nations Population Fund (UNFPA) is extremely proud to have been associated...

Leaders of the Ministry of Agriculture and Rural Development said that digital transformation...

As a country receiving significant investment from abroad, Vietnam's enterprises...

A Vietnamese Ambassador to the UN on April 1 presented a document on the nation’s...

Vietnam was the largest market of Cambodia’s cashew nuts in the first eight months...

The Norwegian animal feed manufacturer is expected to develop aquaculture in the...