Many countries in the world have showed serious concerns over China’s recent deployment of over 200 ships around Sinh Tồn island cluster in Việt Nam’s Trường Sa (Spratly) archipelago and requested the country to immediately bring these vessels out of the area and end all provocations.

Foreign Ministry spokeswoman Le Thi Thu Hang once emphasized that all activities in the Hoang Sa and Truong Sa archipelagoes without Vietnam's permission are "worthless and illegal".

The fact that Chinese ships operate within the territorial sea of Sinh Ton Dong in the Spratly archipelago of Vietnam has seriously violated Vietnam's sovereignty and violated the provisions of the United Nations Convention on the Law of the Sea 1982, contrary to the spirit and content of the Declaration of the Parties in the East Sea (DOC).

In a regular press conference, the Vietnamese Foreign Ministry’s Spokeswoman Lê Thị Thu Hằng said that the operation of the Chinese ships within the territorial waters of Sinh Tồn Đông island in the Trường Sa archipelago violated Vietnam’s sovereignty and the 1982 UN Convention on the Law of the Sea (UNCLOS)’s regulations on the operation of foreign vessels in the territorial waters of coastal nations, run counter to the spirit and content of the Declaration on the Conduct of Parties in the East Sea (DOC), and complicated the situation, which is unfavourable for the process of negotiations between ASEAN and China on a Code of Conduct of Parties in the East Sea (COC). 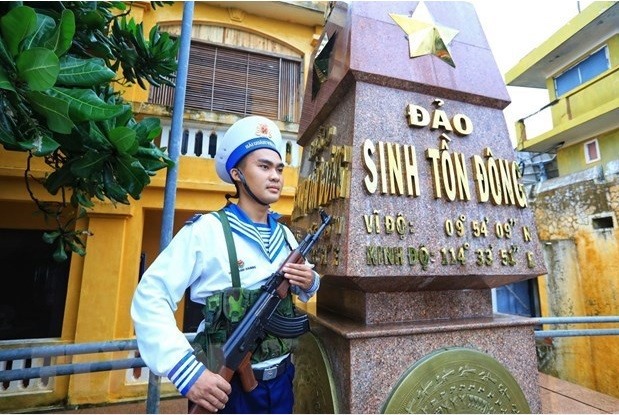 The Philippine Department of Foreign Affairs said in a diplomatic protest that the swarming and threatening presence of the Chinese ships creates an atmosphere of instability and shows that China is ignoring its commitments to promoting peace and stability in the region.

At a reception for Indonesian Foreign Minister Retno Marsudi and Defence Minister Prabowo Subianto on March 30, Japanese Prime Minister Yoshihide Suga voiced his concern over China’s activities in the waters, including the enforcement of its Coast Guard Law which allows patrol ships to use weapons. Both sides spoke highly of the importance of maintaining free and open navigation based on international law.

Meanwhile, Japanese Ambassador to the Philippines Koshikawa Kazuhiko tweeted that the South China Sea (called the East Sea in Việt Nam) issues are directly related to peace and stability and concern for all parties.

“Japan strongly opposes any action that heightens tensions. We support the enforcement of the Rule of Law in the sea and work with the international community to protect the free, open, and peaceful seas,” he stressed on his Twitter account.

Australian Ambassador to the Philippines Steven Robinson tweeted that “Australia supports an Indo-Pacific region which is secure open and inclusive. The South China Sea – a crucial international waterway – is governed by international rules and norms, particularly UNCLOS. We remain concerned about destabilising actions that could provoke escalation”.

Responding to China’s statement that the vessels operating around the Sinh Tồn island cluster are fishing ships and they were just taking shelter from rough seas, Jay Batongbacal, Director of the University of the Philippines’s Institute for Maritime Affairs and Law of the Sea, said that a reconnaissance flight by the Philippine Air Force showed that around 200 vessels have been there for weeks.

“Satellite photos also show that the decks of these vessels are very, very clean. It's as if they're brand new,” he said, adding that “One big worry, of course, is that they might be preparing to occupy the reef in order to construct another artificial island”.

Gregory B. Poling, who is Director of the Asia Maritime Transparency Initiative at the Center for Strategic and International Studies, said that China’s acts are “suspicious” as the boats, tied up “with military precision” beside each other, “are not fishing,” they're parked.

Collin Koh, a Research Fellow at the S. Rajaratnam School of International Studies under Singapore’s Nanyang Technological University, stated that China’s activities are escalating tensions in the East Sea.

It can be said that China’s recent activities in the East Sea have continued challenging international law and violating the sovereignty and sovereign rights of other countries.

In 2016, the Permanent Court of Arbitration (PCA) in The Hague issued a ruling rejecting all China’s illegal sovereignty claims in the East Sea./.

PM: Vietnam always treasures and wants to further develop relations with the Republic...

Everywhere in the Mekong Delta: “The shrimp hugs the rice...

The rice-shrimp model in the Mekong Delta provinces has proven effective when it...

Apart from specialities such as Vinh oranges and eel vermicelli soup, Nghệ An Province...

The Ministry of Transport has issued a set of badges for identifying the vehicles...

The Industrial Estate Authority of Thailand (IEAT) is planning to invest in a water...

The Association of Southeast Asian Nations (ASEAN) has shown its strong commitments...

Vietnam and the US have made milestones in building a forward-looking partnership.

Singapore and France have agreed to maintain open and connected supply chains for...