Visitors to Bac Ha are impressed with a large ancient French-style mansion located in the town center, in front of a river with mountains on both sides. This is a famous historical site in Bac Ha that attract many foreign tourists. The mansion was built in 1914 during the French colonial period and completed in 1921. It is now 100 years old. It was named after Hoang A Tuong, a local lord and the last owner of the building before Bac Ha was liberated from French colonialism in 1950. 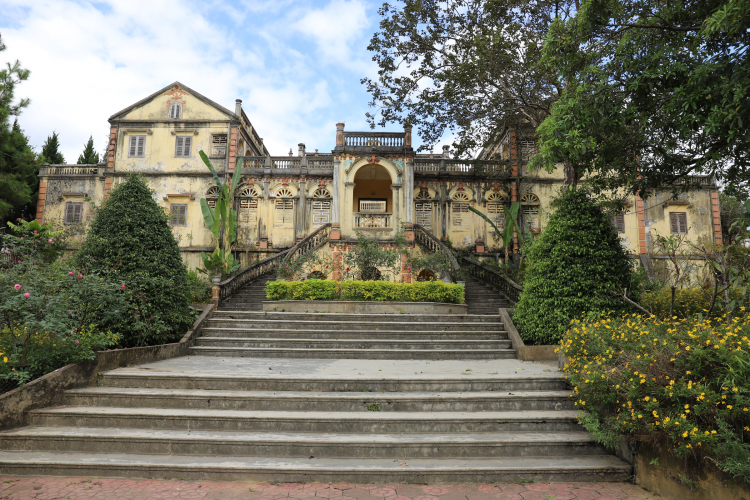 Gate to the mansion. Photo: Q.Lien

The relic used to be the place where the French army was stationed before 1950. Hoang A Tuong and his son, Hoang Yen Tchao, lived and worked in the mansion from 1921 until Bac Ha was liberated.  Constructed on 4,000 sq.m on a hill in the center of Bac Ha Town, the mansion was designed in the styles of ancient French and Asian architecture. Perhaps because it was designed by two architects from France and China, the work has a Eurasian style that makes it different from other French architectures built in Vietnam in the same period. The building is constructed in the shape of a closed rectangle, consisting of two floors with 36 rooms and being decorated with many sophisticated motifs. The long corridors with arches are the building’s highlight. During the building’s construction, Hoang A Tuong carefully selected materials such as iron, steel, cement, brick, tile so the work seems to remain intact until today. The dome is an architectural highlight of the building. Photo: Q.Lien The dome is an architectural highlight of the building. Photo: Q.Lien

In the middle of the building is the 420 sq.m main house. The main side of the house is elaborately decorated, making a difference from the two sides. Western architectural features are demonstrated in many details such as laurel branch motifs embossed on the doors or spiral staircases. The main house is decorated with the most sophisticated patterns that look beautiful from any angle. Photo: Q.Lien

The outside part of the mansion impresses tourists with majestic ancient features. Because the mansion is located on a high hill, if you stand inside the building and look out, you can see the whole town of Bac Ha and admire beautiful surrounding mountains and clouds.

Houses on both sides are the working place of Hoang A Tuong lord’s employees. Photo: Q.Lien Mountains and forests of Bac Ha Plateau can be seen from either the left or the right of the building. Photo: Q.Lien

Because this is both a workplace and a residence of Hoang A Tuong and his son, the building is surrounded by protective fences and has holes on all four sides. However, the building does not weigh as heavily as a fortress. The rooms are roughly equal in size. Some rooms are currently used to display artworks about Bac Ha and traditional costumes of Mong people. Photo: Q.Lien Bac Ha town seen from the main pavilion of the mansion. Photo: Q.Lien

Hoang A Tuong Palace is open to visitors all weekdays from 8am to 5pm. Morning is the best time for photography here./.

Vietnam requires no recurrence from Beijing in the future.

ASEAN launches assessment on impact of COVID-19 on livelihoods...

The ASEAN Secretariat (ASEC) partnered with the Asia Foundation to launch the ASEAN...

The ownership of all 100 cashew nut containers related to a suspected scam in Italy...

The Vietnamese Women’s Museum held a ceremony on May 17 in Hanoi to receive roughly...

Culture ministers of the ASEAN Plus Three countries, including 10 ASEAN member states...

Vietnam’s fulfillment of its term as a non-permanent member...