Everywhere in the Mekong Delta: “The shrimp hugs the rice plant”

The rice-shrimp model in the Mekong Delta provinces has proven effective when it comes to earning nearly three times as high as a monoculture of rice and nearly twice that of shrimp alone. 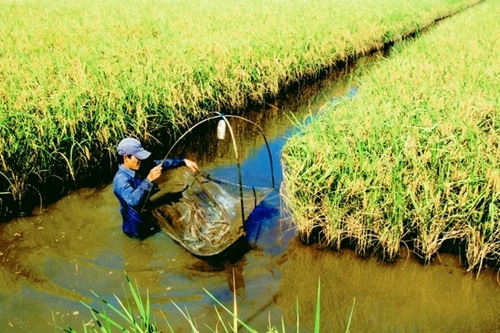 Rice and shrimp farming can develop into a key economic model, not just a favorable one - Photo: vov.vn

Mekong Delta is expanding its shrimp – rice farming areas as the cultivation model is efficient and sustainable, adapts to climate change, and is environmentally friendly.

The area of rice and shrimp production in the Mekong Delta provinces is currently expanding very rapidly. According to aggregated data from the Departments of Agriculture and Rural Development and the local Center for Agricultural Services & Extension, as of September 2021, the total area of rice and shrimp farming in the Mekong Delta has increased to more than 220,710 hectares, most distributed in Kien Giang. with more than 102,486 hectares.

Farmers use fresh water, mostly rainwater, to grow rice in the rainy season, and let saltwater enter the rice fields to breed shrimp in the same rice field during the dry season.

The delta has more than 220,700ha of shrimp – rice farming areas, with Kiên Giang Province accounting for 102,486ha, the largest area, according to provincial departments of agriculture and rural development.

Shrimp - rice farming is seen as a smart farming model and is zoned for sustainable development. “The centre provides cultivation techniques to farmers,” he said. 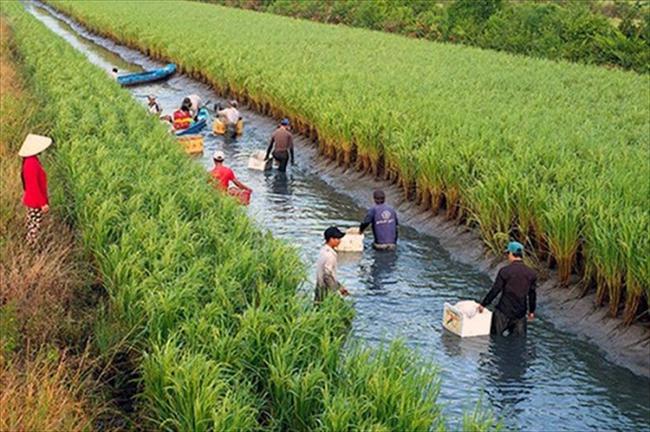 The shrimp rice model is increasingly spreading to many provinces in the Mekong Delta - Photo: Vasep

Phan Văn Chí, who farms shimp and rice in his 8,000sq.m field in Bến Tre’s Thạnh Phú District, said his income has increased two times compared to rice farming only. He earns a profit of more than VNĐ100 million (US$4,400) a year.

Đào Công Thương, chairman of the Thạnh Phú People’s Committee, said the model is sustainable and efficient. It offers an average profit of VNĐ70 - 80 million ($3,000 - 3,500) per hectare a year and is adapted to climate change.

The district is encouraging farmers to expand the areas of shrimp - rice farming and offer tourism services related to the model.

Bến Tre has about 2,500ha of shrimp - rice farming areas and has potential to expand to 15,000ha, according to the province’s Agriculture Extension Centre.

In Bạc Liêu Province, farmers have 39,000ha of shrimp - rice this year. Of the number, nearly 10,000ha are planted with ST24 and ST25, two of the world’s best rice varieties in 2019, according to the province’s Department of Agriculture and Rural Development.

Lưu Hoàng Ly, director of the Bạc Liêu Department of Agriculture and Rural Development, said the province would expand the shrimp - rice farming area to more than 43,000ha in 2025.

To reach the target, the department is providing techniques for farmers to produce rice in large quantities to meet market demand at home and abroad, and increase value. The department will also act as a link between farmers and rice companies to secure outlets for farmers.

Most farmers in coastal areas raising shrimp and cultivating rice on the same fields still depend on rainwater.

Kiên Giang Province’s Vĩnh Thuận District has 10,000ha of shrimp – rice fields but farmers still depend on natural weather conditions for their rice and shrimp cultivation.

Võ Hoàng Nguyên, head of the Vĩnh Thuận Bureau of Agriculture and Rural Development, said the district’s irrigation system is imperfect and the supply of fresh water still depends on rainwater.

Cà Mau Province has about 36,00ha of shrimp - rice farming areas this year but most of the areas have weak irrigation systems, according to the province’s Irrigation Sub-department.

Nguyễn Long Hoai, head of the sub-department, said that since most canals in shrimp - rice farming areas are open canals, saltwater enters the rice fields, damaging the crop, when hot weather and drought occurs early.

Last month, the Ministry of Agriculture and Rural Development began operation of the first phase of the Cái Lớn - Cái Bé irrigation system, the delta’s largest, on a trial basis.

The Cái Lớn - Cái Bé irrigation system is expected to serve a total area of 384,120ha of agriculture and aquaculture in Cà Mau, Bạc Liêu, Sóc Trăng, Hậu Giang and Kiên Giang provinces in the delta.

Mr. Le Thanh Tung, Deputy Director of the Department of Crop Production, emphasized that the position and role of the rice-shrimp model in the Mekong Delta is very important. It must be determined that this is no longer a favorable model but a key economic model, a sustainable economic model that must be controlled for good management.

"We also need to have a clear orientation for farmers' production to follow processes and standards to create high-quality products with certifications that meet the requirements of businesses and the market, avoiding the situation that farmers Grow whatever you like and follow the custom. If you can overcome the above situation, the product will have stable orders and output," said Mr. Tung./.

Apart from specialities such as Vinh oranges and eel vermicelli soup, Nghệ An Province...

Many countries in the world have showed serious concerns over China’s recent deployment...

An image snapped by Vietnamese photographer Tran Viet Van has been named the winner...

Thailand’s cabinet on April 7 approved a proposal of the country’s Ministry of Education...

Vietnam needs to produce a sure and safe roadmap for reopening

The nation needs to produce a sure and safe roadmap as it moves to reopen activities,...

Malaysia’s authorities have urged all foreign workers in the country to undergo...