The welcoming ceremony for President Nguyen Xuan Phuc took place at the Revolutionary Palace - Headquarters of the Council of State of Cuba, held according to the highest ceremony for the head of state.

The welcoming ceremony for President Nguyen Xuan Phuc took place at the Revolutionary Palace - Headquarters of the Council of State of Cuba, held according to the highest ceremony for the head of state.

During the ceremony at the Revolutionary Palace, the headquarters of the Cuban Council of State at about 6pm on September 19 (6am 20/9 Hanoi time), First Secretary of the Communist Party of Cuba, President Miguel Diaz Canel welcomed President Nguyen Xuan Phuc in the main hall and together went to the position of honor, when military music played the national anthems of the two countries. After saluting the national flags of the two countries and reviewing the honor guard, the two leaders entered the conference room.

The special fraternal solidarity between Vietnam and Cuba was initiated and established by President Ho Chi Minh and the historic leader of the Cuban Revolution Fidel Castro Ruz. It has continuously consolidated and cultivated it for more than 60 years, becoming an "exemplary relationship" in international relations as once assessed by Leader Fidel.

Cuba has never felt alone thanks to the country’s time-tested solidarity with Vietnam, First Secretary of the Communist Party of Cuba Central Committee and President of Cuba Miguel Díaz-Canel Bermúdez has said in an interview granted to the Vietnam News Agency.

Regarding the significance of the historical relations between Cuba and Vietnam as well as of the official friendship visit to Cuba by President of Vietnam Nguyen Xuan Phuc, he affirmed that the heroic Vietnamese people are always among the most sincere friends of Cuba in complicated times, expressing his gratitude to Vietnam’s consistent support for Cuba’s struggle to end the unjust economic, commercial and financial embargo imposed by the US. 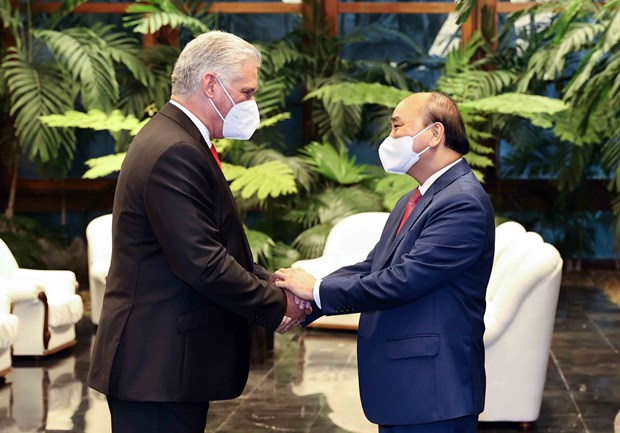 The countries celebrated 60 years of the establishment of diplomatic ties last year, he said. Since the revolutionary government of Cuba set up relations with Vietnam on October 2, 1961, the special and steadfast relationship had been nurtured by leaders Fidel Castro and Raul Castro of Cuba and Ho Chi Minh of Vietnam, during difficult times of the struggle for national liberation and reunification as well as the national construction of the Vietnamese people.

Many schools, public squares and facilities in Cuba have borne Vietnamese names as symbols of an era and mutual feelings of a sound and long-standing solidarity between the nations.

Up to now, Vietnam and Cuba have established and increasingly improved the efficiency of cooperation mechanisms in all fields, especially in economic, trade and investment, notably that Vietnam has now become an important partner. Cuba's second largest trading partner and largest investor from the Asia-Oceania region.

Cuba takes pride in being the first country to recognise the National Liberation Front for South Vietnam and accept a permanent mission of the Front in Havana. 1967 was named the “Year of Heroic Vietnam” in Cuba, and two years later the Caribbean nation was the first one to recognise the Provisional Revolutionary Government of the Republic of South Vietnam and opened an embassy in deep forest, President Miguel Díaz-Canel Bermúdez recalled.

Many Vietnamese students have been studying in Cuban universities, he added.

Under the leadership of the Communist Parties, both countries have stayed consistent on the path of building socialism based on their respective realities. They have regularly shared experience, demonstrating a rare mutual political trust supplemented by the bilateral cooperation across all fields.

In the context of the ongoing pandemic, Cuba welcomes the visit by President Nguyen Xuan Phuc and the leaders have reached consensus on the unchanged target of the comprehensive development of the bilateral relations.

It is noteworthy that the ongoing pandemic cannot hinder political dialogues at the highest level between Cuba and Vietnam, the Cuban leader underlined. He said that high-ranking leaders will continue to pay attention to and give top priority to the exemplary relationship of the two nations.

The top leader of Cuba said the two countries will step up cooperation in potential fields of food security, information work and the fight against hostile communication campaigns.

They will also join hands in the conservation of historical memories and strengthen close collaboration in spheres of mutual concern among outstanding international issues.

The special relations and long-lasting cohesion between the two nations, Parties and Governments serve as a solid foundation to elevate economic, commercial and financial ties on par with the sound political relations.

The nations are expected to lift trade exchange and economic cooperation to a higher level with the signing of the plan of action to implement the middle-term economic agenda for the 2021-2025 period.

With the supply and technology transfer of Cuba’s Abdala COVID-19 vaccine for Vietnam, the countries’ friendship has been strengthened as Cuba and Vietnam tighten partnership in health care and biotechnology, he stated.

The Cuban leader believed that Vietnam holds potential in enhancing its position as the largest Asia-Oceania investor in Cuba.

For its part, Cuba will continue creating a favourable business climate for the same goal based on the potential of Vietnamese firms operating in the country.

He cited Cuban leader Fidel Castro’s saying “For Vietnam, Cuba is willing to shed its blood”, adding that now Cuba stands ready to supply and transfer production technology of COVID-19 vaccines for Vietnam. “In the face of global challenges, Cuba and Vietnam will definitely win when we are united,” he reiterated./.

Economic Ministers from the ten ASEAN Member States (“the Ministers”) met with the...

The States Parties to this Treaty: DESIRING to contribute to the realization of...

JAKARTA/ONLINE, 30 November 2020 – Senior officials from ASEAN and the European...

We, the Finance Ministers and Central Bank Governors of ASEAN, China, Japan and...

The Bangkok Metropolitan Administration (BMA) has handed out over 20,000 vegetable...

Babies with mothers infected with COVID-19, born between April 27 and December 31,...

Indonesia had submitted a vaccine request form to COVAX Facility, a global COVID-19...

An official of the Vietnamese National Assembly has suggested continuing to review...

Solidarity is strength in ASEAN cooperation to fight COVID-19:...