55 years of ASEAN - One vision, one identity, one community

On the occasion of ASEAN's 55th founding anniversary (August 8) and Viet Nam's the 27th accession to ASEAN anniversary (July 28), Minister of Foreign Affairs Bui Thanh Son wrote an article about the journey towards an ASEAN Community and Vietnam's contributions to the Association's common vision. 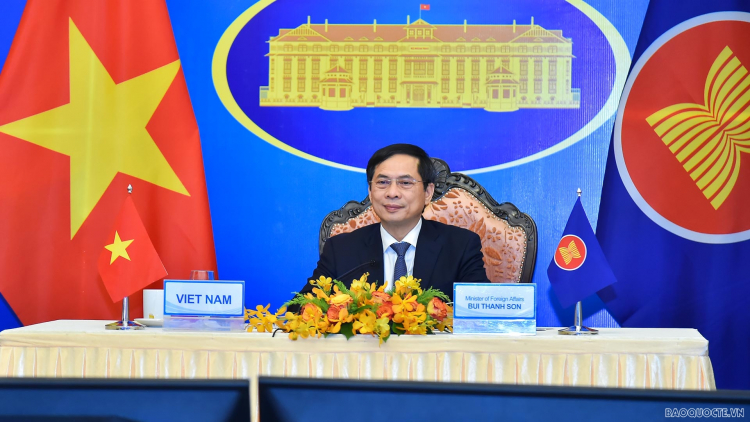 On 8 August 1967, the Association of Southeast Asian Nations (ASEAN) was established, marking the first step in its extensive integration process for peace, stability and development in Southeast Asia and the broader region. From a group of Southeast Asian nations divided by war, after 55 years of development, ASEAN has today become one of the world's most important, reputable and successful regional organizations. It is the common home shared by 650 million people of the ten ASEAN member states with diverse cultural identities. It is the fifth largest economic community in the world. It is a reliable and important partner of many countries playing a central role in the important processes of dialogue, cooperation and integration in the region.

The birth of ASEAN 55 years ago was a reflection of the shared aspirations of many regional countries for peace, stability, friendship and cooperation for mutual development. Overcoming the ups and downs and responding to the changes in the region and the world, ASEAN has grown from strength to strength and developed itself in many ways.

In 1995, Viet Nam's accession to ASEAN paved the way for this Association to embrace 10 Southeast Asian nations under one roof. In 1997, ASEAN for the first time adopted the ASEAN Vision 2020 for a Community “bound by a common identity”, that would live up to the aspiration of its member states for a Community “where our mountains, rivers and seas no longer divide us but link us together in friendship, cooperation”. Notably, in 2015, the ASEAN Community came into being comprising three pillars, namely Political-Security, Economic, and Socio-Cultural, hence elevating the regional cooperation and linkage to a new height in the interest of peace, cooperation, development and prosperity.

The "ASEAN Way", grounded in the fundamental principles of international law, solidarity, consensus and non-interference, has been consistently preserved, built on and advanced, thus creating the value and identity of ASEAN. It is the “ASEAN Way” that has helped ASEAN and its members overcome the tempestuous times of the region and the world. Furthermore, every time it successfully sails through challenges and hardships, ASEAN will grow stronger, its spirit of solidarity and unity will be further upheld, and ASEAN way and identity will shine brighter. For this reason, ASEAN is able to enhance its reputation, standing and centrality, as well as to broaden, deepen and add greater substances to its relations with partners. ASEAN is also able to win the broad and effective support from the international community to further promote its development and integration. As of today, ASEAN has enjoyed dialogue partnerships with 11 high-profile countries and international organizations (including China, the US, Russia, Japan, the ROK, India and the EU, among others). Many ASEAN’s positions and regulations, such as the ASEAN Charter and the Treaty of Amity and Cooperation (TAC), are well received and supported by the international community, thereby contributing to the strengthening of cooperation and elevation of relations with ASEAN. 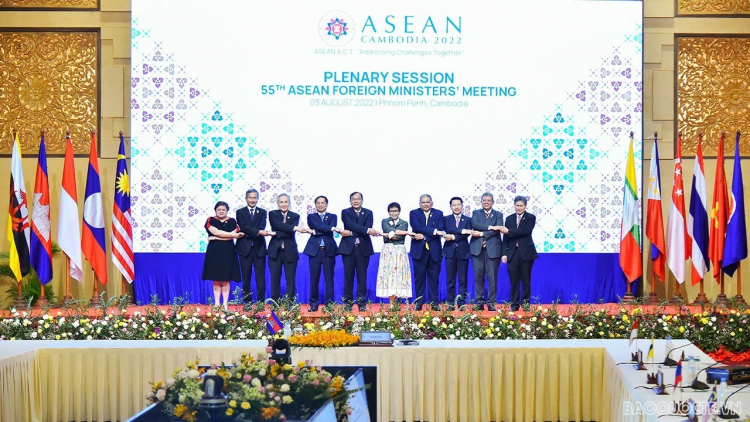 ASEAN has remained true to its mission and goal. It has, therefore, brought into play its important role in promoting dialogue, cooperation and confidence-building between the countries within and beyond the region with a view to maintaining peace, stability, cooperation and development in the region. On the basis of upholding international law and settling disputes and differences by peaceful means in line with international law, including the 1982 United Nations Convention on Law of the Sea, ASEAN has been an important contributor to the preservation of a peaceful and stable environment in the East Sea (South China Sea), and hence enjoying the international support in this process.

The advancement of regional integration and economic linkage has always been a central aspect of the ASEAN integration process over the past 55 years. To date, intra-ASEAN trade accounts for 25% of ASEAN's total trade turnover. Its GDP in 2021 was US$3.36 trillion, an increase of 30% since the establishment of the ASEAN Community in 2015. In addition, ASEAN is also the heart of a broadening economic space through a network of eight free trade agreements (FTA), including the ASEAN Free Trade Area (AFTA) and seven FTAs with key partners. Notably, the Regional Comprehensive Economic Partnership (RCEP) has formed a free trade area encompassing 30% of the global population, and 32% of the world GDP.

Through its fifty-five years of building and development, ASEAN can well take pride in itself to be a successful regional integration model. Its achievements have constituted a strong foundation for ASEAN to fulfill the ASEAN Vision 2025 and to shape a post-2025 ASEAN Vision to further advance an ASEAN Community of solidarity, resilience and responsiveness. Solidarity is to bring about single-mindedness, cultivate community awareness, and foster shared responsibility for the common and long-term interest of the ASEAN Community for peace, stability, cooperation and development in the region. Resilience is to maintain the independent identity and build the internal strength and power of each member state and of the Community as a whole. And Responsiveness is to keep the Association's confidence, dynamism and innovation, and steady its march forward in a regional and global landscape of complex changes. 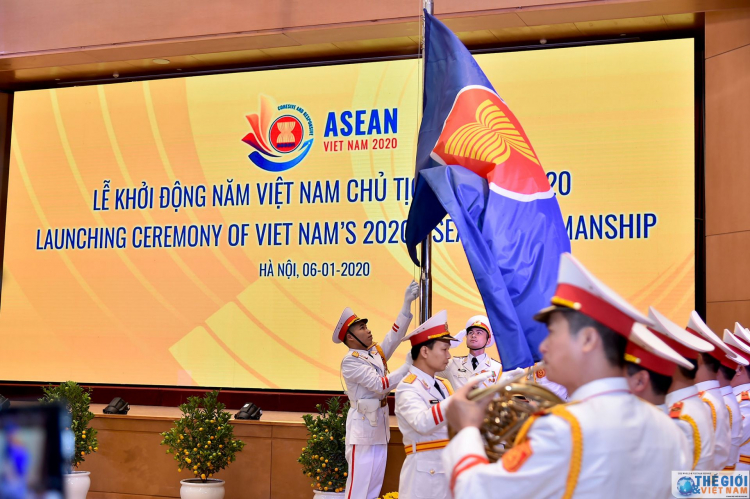 Viet Nam Always Working for an ASEAN Community of Solidarity, Strength and Development

ASEAN plays an important role in Viet Nam's foreign policy and international integration. Joining ASEAN in 1995 is a decision of strategic significance by the Vietnamese Party and State. This decision has helped bring about a new posture for Viet Nam's international integration and national development, bolster an environment of peace and stability, win external resources for national construction and defense, and enhance the prestige and standing of the country as well.

Viet Nam perseveres with its foreign policy of independence, self-reliance, peace, friendship, cooperation and development, multilateralization and diversification of relations, and respect for ASEAN principles, way and identity. Viet Nam has strictly fulfilled its commitments and obligations as an ASEAN member, and made important contributions to fostering solidarity, realizing an ASEAN made of ten member states, building the ASEAN Community, and fulfilling the ASEAN Vision 2025. In ASEAN activities, Viet Nam always upholds solidarity and consensus in the spirit of “solidairty, solidarity, great solidarity; success, success, great success.”

Viet Nam's ASEAN chairmanships always coincided with periods of adversity facing the Association. Notably, during its 2020 ASEAN Chairmanship, despite numerous unprecedented hardships caused by the COVID-19 pandemic, Viet Nam persevered with the ASEAN principles, and fully demonstrated the spirit of “cohesiveness and responsiveness” in helming the ASEAN ship out of the storm, sustaining the momentum for regional cooperation and integration and charting the course for the ASEAN Community's future developments.

In pursuit of the foreign policy line of the 13th National Party Congress, Viet Nam will continue to join fellow ASEAN member states in further promoting the ASEAN identity and centrality, building a united and strong ASEAN Community, and bringing about real benefits to all ASEAN members and its partners within and beyond the region. Under its watchwords of proactiveness, earnestness, reliability and responsibility, Viet Nam will continue to make every effort along with the ASEAN in penning new success stories in the building of the ASEAN Community, contributing to peace, stability, cooperation and development in the region and the wider world. 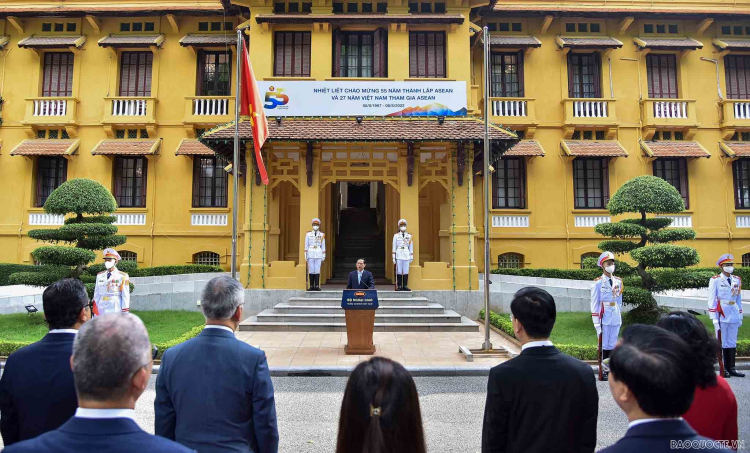 Minister of Foreign Affairs Bui Thanh Son delivers his remarks at the flag raising ceremony to celebrate the 55th founding anniversary of ASEAN at the headquarters of the Ministry of Foreign Affairs on August 8. (Photo: Nguyen Hong)

Children whose parents have died due to the epidemic will be exempted from tuition...

Vietnamese businesses in the UK support their homeland...

Vietnamese businesses in the UK donated over 2 billion VND (more than 87,800 USD)...

Vietnam’s unique geography creates a range of weather patterns, with both tropical...

Exports of Thai rice have been on the rise as many countries are stocking up on...

Indonesia records the highest daily number of COVID-19 cases on August 27 with 2,719...

A new report from the Asian Development Bank (ADB) shows that strengthening the...