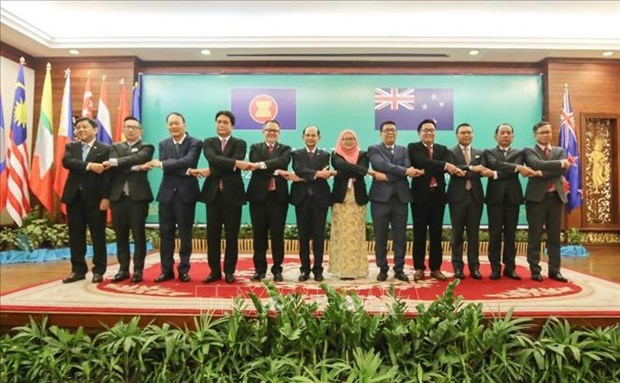 Participants at the dialogue (Photo: VNA)

Participants acknowledged outcomes in cooperation between ASEAN and New Zealand, and pledged to closely coordinate in ensuring efficiency of regional cooperation mechanisms such as the East Asia Summit (EAS), the ASEAN Regional Forum (ARF), the ASEAN Defence Ministers' Meeting Plus (ADMM).

Sharing the same view of supporting an open, fair and rules-based multilateral international trading system, the two sides agreed to evaluate the implementation and negotiation for upgrading the ASEAN-Australia-New Zealand Free Trade Agreement (AANZFTA) and exert efforts to complete negotiations on the Regional Comprehensive Economic Partnership (RCEP) in 2020.

The meeting also noted the progress of drafting the ASEAN-New Zealand Action Plan for the period 2021-2025.

New Zealand affirmed its support for the central role played by ASEAN in the region, while appreciating the “ASEAN Outlook for the Indo-Pacific” document, and proposing the strengthening of cooperation in the fields relating to security, economy, people and environment.

Regarding international and regional situations, the two sides reiterated their views on the East Sea stated at the ASEAN Foreign Ministers’ Retreat in January, which emphasised the importance of maintaining peace, stability, security, freedom of navigation and aviation in the East Sea, strictly and fully implementing the Declaration on the Conduct of Parties in the East Sea (DOC), and actively negotiating to build an effective and substantive Code of Conduct in the East Sea (COC).

The two sides also shared concern over the impact of the coronarivus disease (COVID-19) on the world and the region, and agreed to enhance cooperation to combat this disease.

As the ASEAN Chair, Vietnam shared ASEAN's priorities and initiatives in 2020, affirming that Vietnam will continue to promote the close relationship between the bloc and New Zealand.

Vietnam also suggested stronger cooperation between the two sides in specific fields such as maritime collaboration, economic connectivity, sub-regional development and gender equality. It affirmed to closely coordinate with ASEAN countries and New Zealand to successfully organise the ASEAN-New Zealand Summit in order to celebrate the 45th anniversary of the partnership between the two sides in April this year./.

Vietnam, in its capacity as ASEAN Chair 2020, has played a significant role in initiating,...

On the morning of September 12, at the Government headquarters, Prime Minister Pham...

Vietnam will discontinue automatic stay extension for foreign nationals in the country...

In Vietnam, you can see a lot of villages with different beauty and culture. In...

The Ministry of Planning and Investment (MPI) has announced plans to issue more...

Prime Minister Pham Minh Chinh on August 21 sent a message of congratulation to...

The 28th meeting of the Senior Officials’ Committee for the ASEAN Socio-Cultural...

Schaeffler Vietnam wins Best Company to Work for in Asia...

Schaeffler Vietnam has been named among the Best Companies to Work in Asia 2021...